In the previous modules we introduced the idea of a statistical model as a number. We developed what we called the empty model, which we wrote like this (in GLM notation):

(Note: now that we are going to have different means for males and females, for example, we will use the term Grand Mean to make clear when we are referring to the mean for everyone in the sample.)

When we use the notation of the General Linear Model, we must define the meaning of each symbol in context. \(Y_{i}\), for example, could mean lots of different things, depending on what our outcome variable is. But we will always use it to represent the outcome variable.

It’s useful to illustrate the null model (or empty model) with our tiny data set called TinyFingers. Remember, it is a data set with six people’s thumb lengths, three males and three females. It was randomly selected from our complete Fingers data set.

Let’s look at just these six thumb lengths the same way we did above, with two histograms (left panel, below). It’s actually a little clearer, with such a small data set, if we represent the same data as a jitter plot (right panel).

Adding an Explanatory Variable to the Model 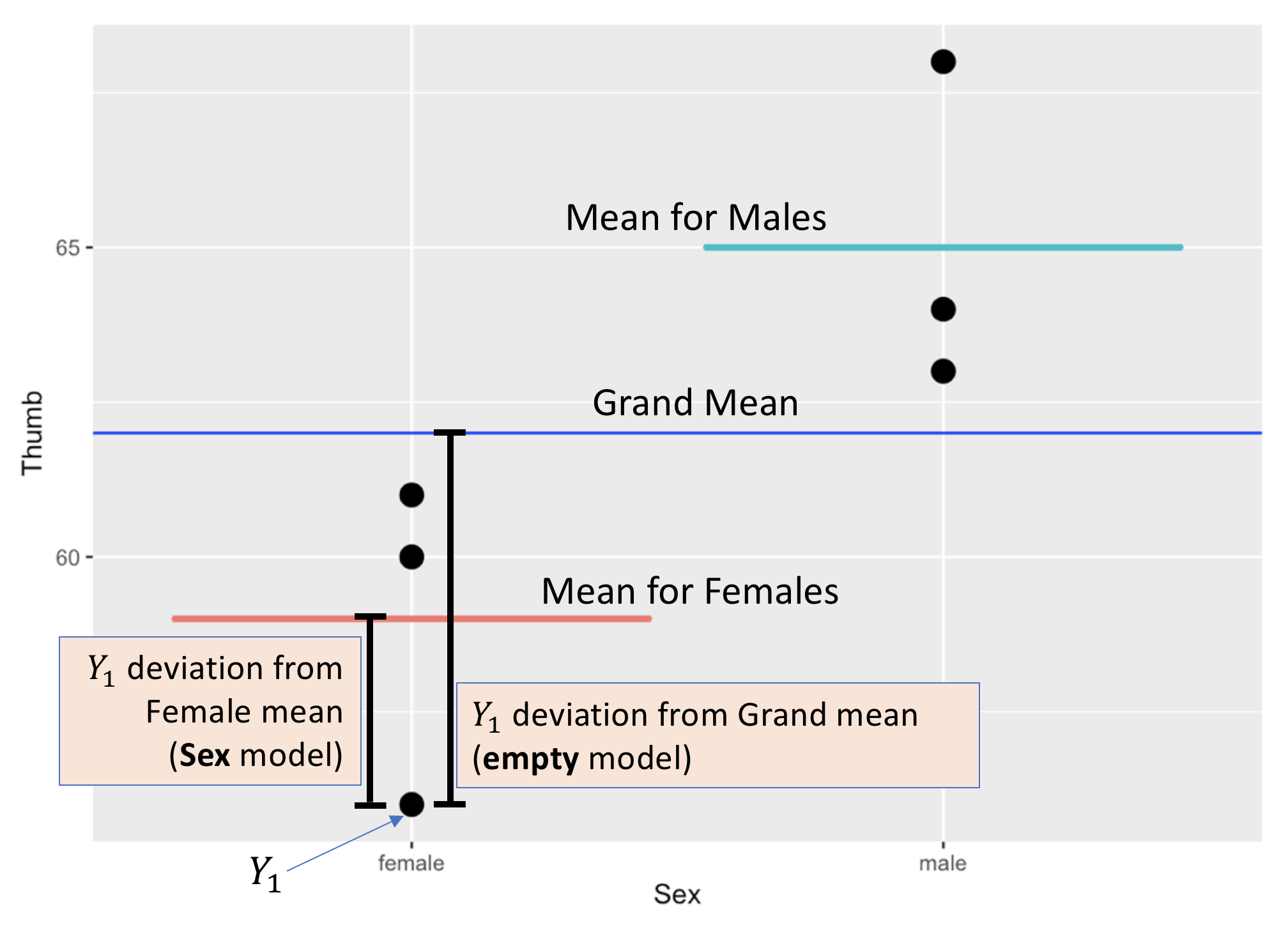 There are actually a few ways you could write this model; we will write it like this:

Two Interpretations of the GLM Notation for a Two-Group Model

The model statement \(b_{0}+b_{1}X_{i}\) actually has two interpretations, each representing a different way of thinking about the two-parameter model.

Under both interpretations, \(b_{0}+b_{1}X_{i}\) needs to result in each person’s predicted thumb length—the number that when added to their error (\(e_{i}\)) will equal their actual score. In this two-group model, there should be two possible predicted thumb lengths: one for males and one for females.

Under the first interpretation, \(b_{0}\) represents the Grand Mean (or 62 mm)—in other words, it has the same meaning as in the empty model, which includes only the mean. In order to go from the Grand Mean to the prediction based on Sex, \(b_{1}X_{i}\) will need to represent the deviation of the group mean from the Grand Mean.

Note that this does not mean that you have to code the variable in the data frame in any particular way. The software takes care of that for you. You can code Sex with any numbers you choose (e.g., 1 and 2 or 0 and 100). But if the data analysis software fits the model in this way, it will treat sex as coded +1 and -1.

We can rewrite the model statement substituting the parameter estimates for the parameters \(b_{0}\) and \(b_{1}\) like this:

Interpretation #2: Group One Plus Increment

Argh, we can hear you say! Why do we need to know a second interpretation of the model statement \(b_{0}+b_{1}X_{i}\)? The answer is that it is good for you! One of the important advantages of mathematical notation is that it can be interpreted in different ways depending on what is most useful at the time. So, one of the things you need to learn is to use notation flexibly.

Under the second interpretation of this model statement, \(b_{0}\) does NOT represent the Grand Mean (62), but instead represents the mean for females, which is 59.

If we use this second interpretation, here is how we would rewrite the model to include the estimated parameters:

Summary of the Two Interpretations

We have summarized these two interpretations of the model statement \(b_{0}+b_{1}X_{i}\) in the table below. Note that the points where the interpretations differ are highlighted yellow. 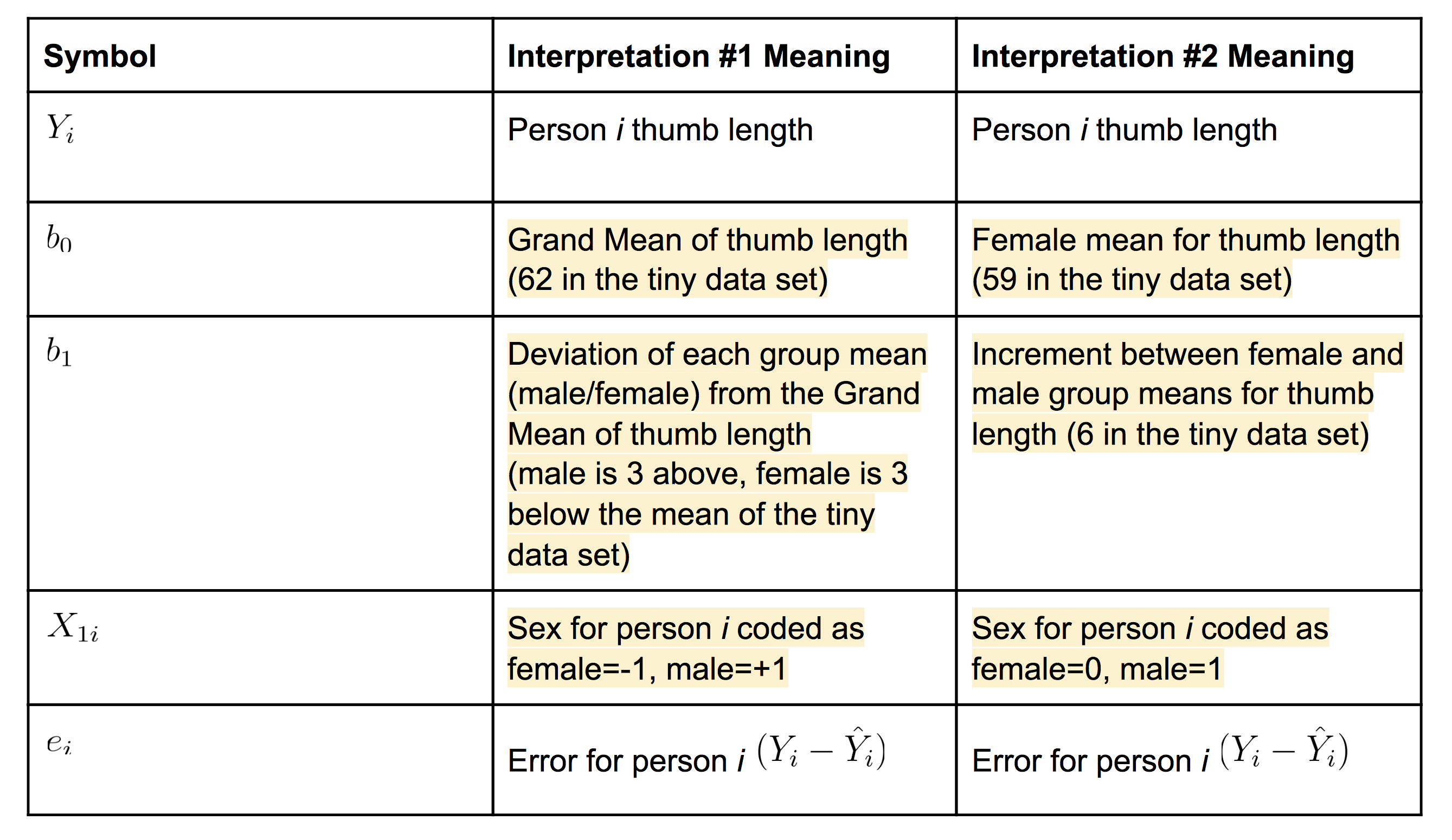 In general, for purposes of this course, we will go with the second interpretation, with \(b_{0}\) representing the mean of one of the groups. We do this because R’s lm() function is designed to work this way.

Although it’s important for you to understand why \(X_{i}\) would have to be coded differently under the two interpretations, you won’t really have to do that coding in this course. R will figure it out for you. You just need to understand which approach R is taking or else you will misinterpret the parameter estimates.

Of course, under both models (empty and two-group) the error is the residual from the predicted score under the model. It so happens that in the empty model, that predicted score was the mean. In the two-group model, the error is the residual from subtracting out the male mean if you are male, or the female mean if you are female.

No matter how complex our models become, error is always defined as the residual from the predicted score for each data point.