PRE alone, therefore, is not a sufficient guide in our quest to reduce error. Yes, it tells us whether we are reducing error. But it does not take into account the cost of that reduction. Just as sum of squares needed to be divided by n-1 (degrees of freedom) in order to get a comparable measure of variation (variance), we need a way to correct PRE so as to take into account the number of parameters it takes to realize the gains in PRE. This brings us to the F ratio.

Let’s go back to our analysis of variance table (reprinted below) and focus on the three columns that come between SS and PRE: df, MS, and F. Just a note: df stands for degrees of freedom, MS stands for Mean Square, and F, well, that stands for the F ratio.

Let’s start by looking at the last row of the table.

If you take the SS and divide by the degrees of freedom (which is n-1 for the empty model) you end up with Mean Square also called variance or \(s^2\).

Try it out. We’ve written the code to calculate the variance of Thumb length using the function var(). Use R as a calculator and try taking the sum of squares for the empty model and dividing by the degrees of freedom.

Let’s think about the degrees of freedom we have with thumb lengths. We start with a maximum budget of n = 157, because we have 157 thumb lengths in our Fingers data frame. When we created an empty model, we estimated one parameter (the Grand Mean). We used that mean to calculate our SS and eventually MS. So we could say we spent a degree of freedom in order to get our MS for the empty model, which leaves us with n - 1, or 156, df.

The two-group model (Height2Group.model) costs two degrees of freedom because it has one more parameter than the empty model. Looking at the df and SS for the row “Model (error reduced)” reveals that, for just the price of one more degree of freedom, we have reduced our squared error (\(SS_{Model}\)) by 830.88.

Let’s think about the df we have left over. We started with a budget of n=157 and then spent two degrees of freedom on the Height2Group model, which means we have n-2, or 155 df, left over. A general rule of thumb (no pun intended) is this: every time you add a parameter to a model you “spend” one degree of freedom.

If you take the SS and divide by the degrees of freedom you end up with Mean Square. But there are a few different kinds of MS as shown in the three rows of our supernova table.

The last row is the variance, average squared error, from our empty model. We call that MS Total and could write it like this— \(MS_{Total}\)—to indicate the MS from the empty model depicted in the row labeled Total. When you look at that variance (76.16), think back to the idea of the average blue square based on the deviations from the data points to the Grand Mean. (The figure below depicts the blue squares for TinyFingers but it would be similar for the larger Fingers data set.) 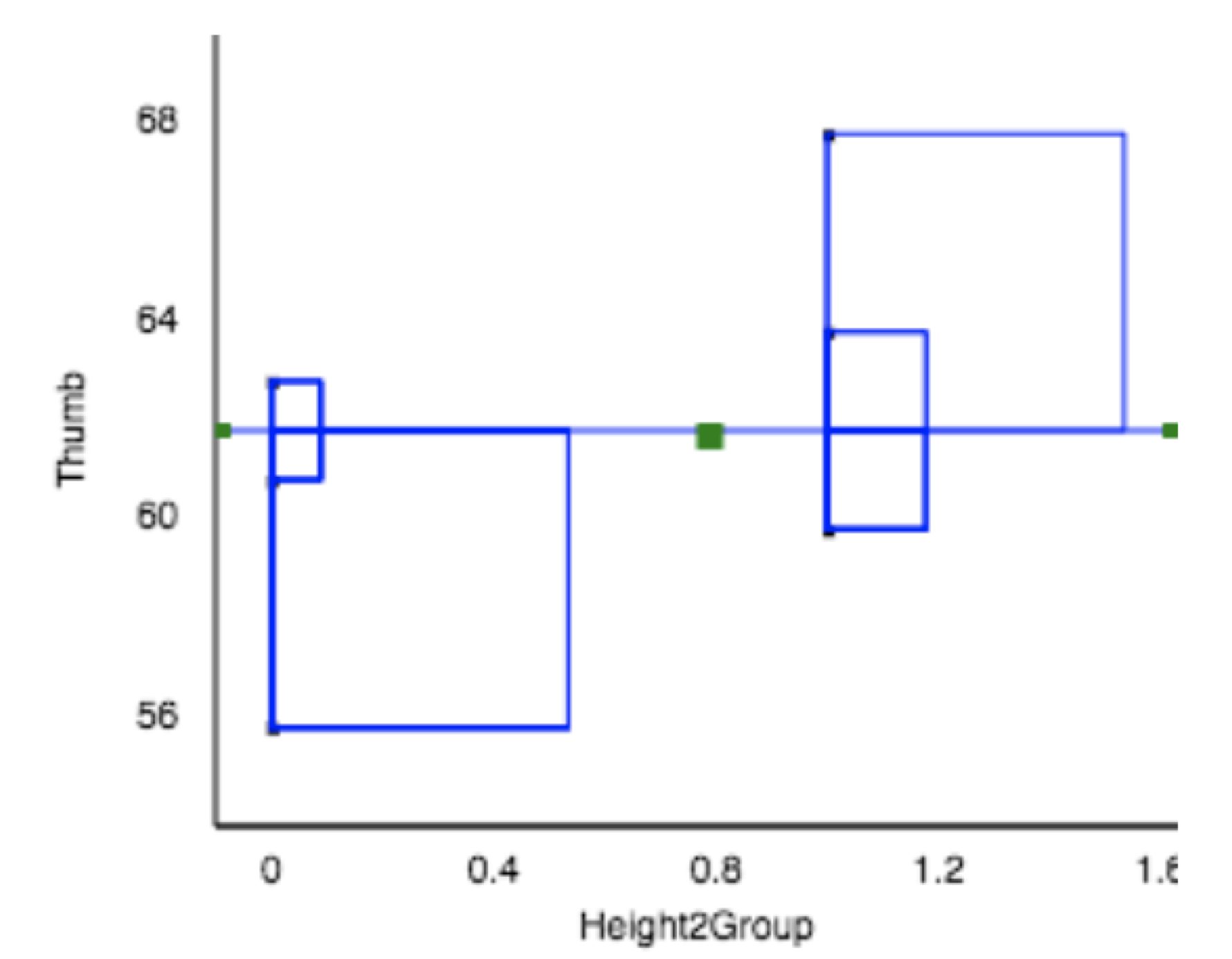