Simulations from a Different DGP, and Learning to Say “If…”

All of this gets very hypothetical, as there are many unknowns. Our sample distribution is known, but that’s about it. From there we must make assumptions, saying “If…” This is the world of simulation. Once we have some ideas, or hypotheses, about the DGP, we can then use computers to simulate the construction of a sampling distribution. This allows us to say, “If the DGP is like this, then here is what the distribution of sample statistics could look like.”

From there we can go back to our data, our particular sample, and see where it would fit if the assumptions we made are true. And, we don’t have to stop there. We can change our assumptions and start the simulations again. As we will see, this is an incredibly powerful way of thinking.

In this section we are going to explore simulations from a different DGP, one we will assume can be modeled by a normal distribution. Die rolls are nice because we know a lot about the DGP that controls them. But most things we study are not generated by a uniform DGP. Most things are more like thumb length: caused by many factors, measured and unmeasured, and normally distributed. Let’s see how much we can understand about thumb length through simulations.

Thumb Length: Simulating a Random Sample from a Population

Recall we collected a sample of n=157 thumb lengths of undergraduate students. Just to review, let’s look at a histogram of our sample distribution. This is real, not simulated. 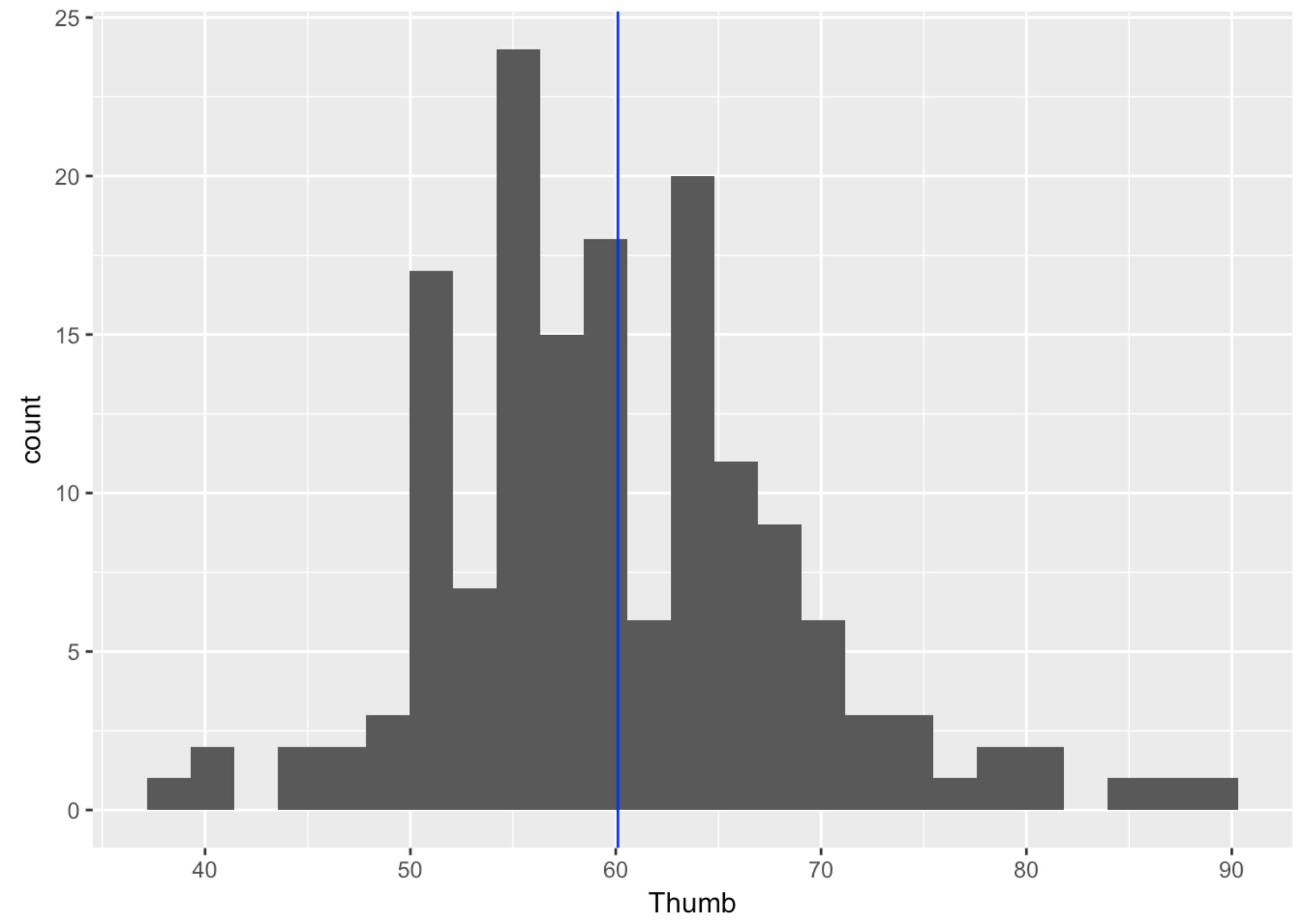 Now let’s start thinking about some hypotheses to guide our simulations. Let’s assume, just for argument’s sake (remember, we are starting with “If…”) that the distribution of thumb length in the population is normally shaped. It’s true that our sample distribution is not perfectly normal. But by now you have seen many examples of weirdly shaped sample distributions coming from normal population distributions. And besides, normal seems to make sense in this case.

Here are the favstats for Thumb from our sample.

Let’s just use these sample statistics to estimate our population parameters. We will assume that the mean of the population is 60.1, and the standard deviation, 8.73. We know that these estimates are unlikely to be true. But we also know that they are the best unbiased estimates we can come up with based on our single sample. So we will use them.

Even if we assume this simple DGP, if we simulate drawing multiple samples, the individual samples generally will not look like our hypothesized population distribution. Let’s try some simulations and see what happens.

Normal distributions are very easy to simulate because they are mathematically defined by just two parameters.

Since we are going to need the mean and standard deviation of our sample, let’s start by saving the favstats() for Thumb from the Fingers data frame in an R object called Thumb.stats. We’ll use these to define our hypothesized normal population distribution, and by saving them we won’t need to keep typing them in.

We will start by generating a sample of one data point:

Go ahead and generate one data point by running this code.

Modify the code below to simulate randomly drawing 20 thumb lengths from the hypothesized population. 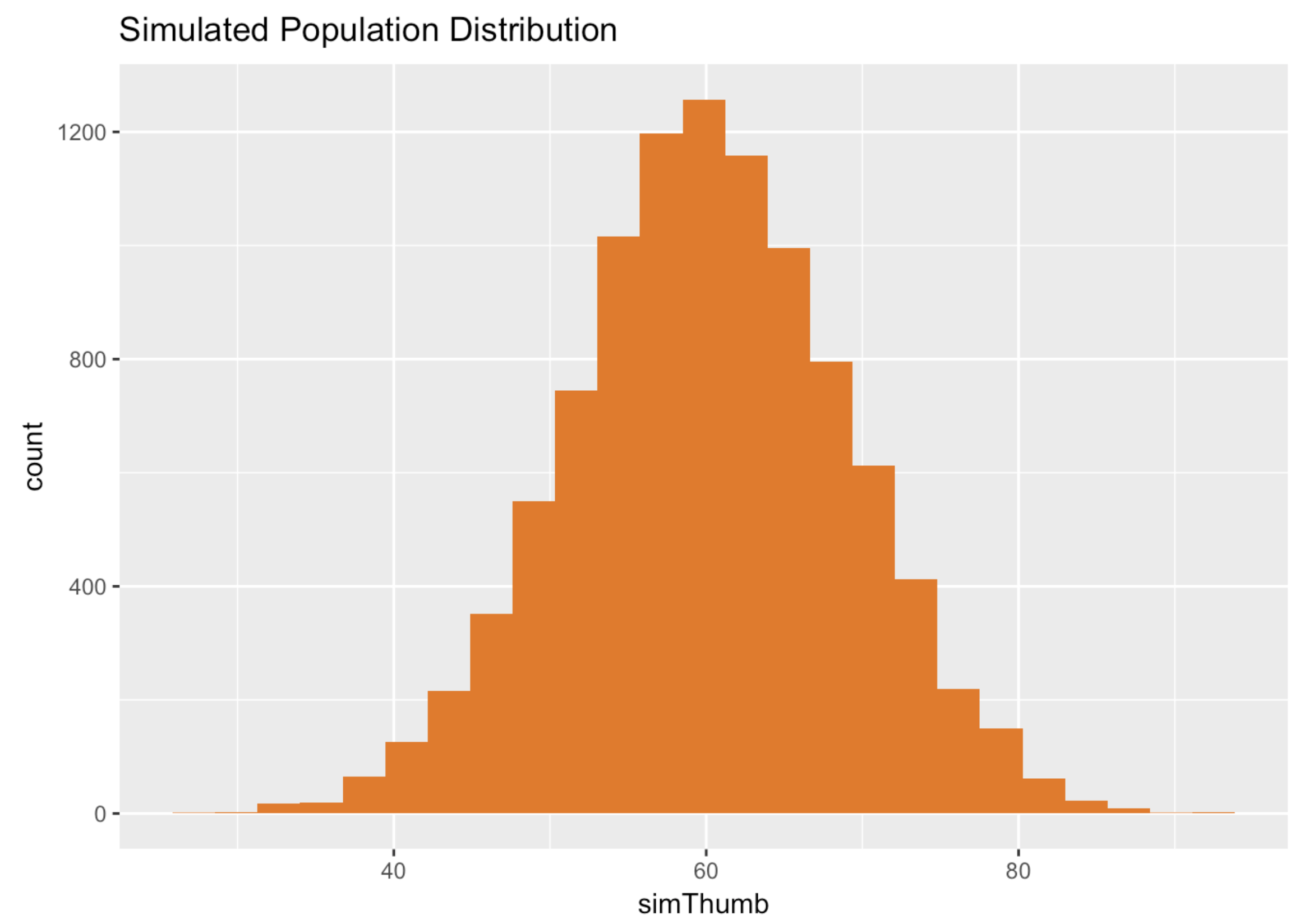 Note that the simulated distribution looks very close to normal in shape—just like the population shape we hypothesized. You can also see that even a DGP centered around 60.1 mm, with a standard deviation of 8.73, could still generate thumb lengths as large as 80 mm or as small as 40.

Go ahead and calculate the favstats() for simThumb in the simpop data frame in R.

Using “If…” thinking, we have been able to simulate a distribution that helps us think about what the population would look like if the DGP were a particular normal distribution. But simulating a population of individuals does not directly help us understand sampling variation. For that, we need to use the same “If…” simulation strategy, but generate multiple samples instead of a single sample of individual thumb lengths.