10.0 Confidence Intervals and their Uses

Confidence Intervals: Estimating the Error in an Estimate

In the previous chapter we developed the concept of sampling distribution. When we do a study we collect a sample of data, randomly sampled from some population. Based on the sample we calculate statistics such as the mean of a quantitative variable. We use this mean as an estimate of the population mean.

Confidence intervals let us build on this logic to quantify, based on the characteristics of sampling distributions, how far off our estimate might be. Instead of just a qualitative statement of how much fluctuation there might be in our estimate, confidence intervals let us say things like: “Our estimate of the true mean is 60.1 mm. But we can say with 95% confidence that the true mean is somewhere between 58.72 and 61.52.”

The Basic Idea Behind Confidence Intervals

The basic logic behind confidence intervals was developed in the previous chapter. But it’s a hard concept to understand, and so it’s worth reviewing it again. 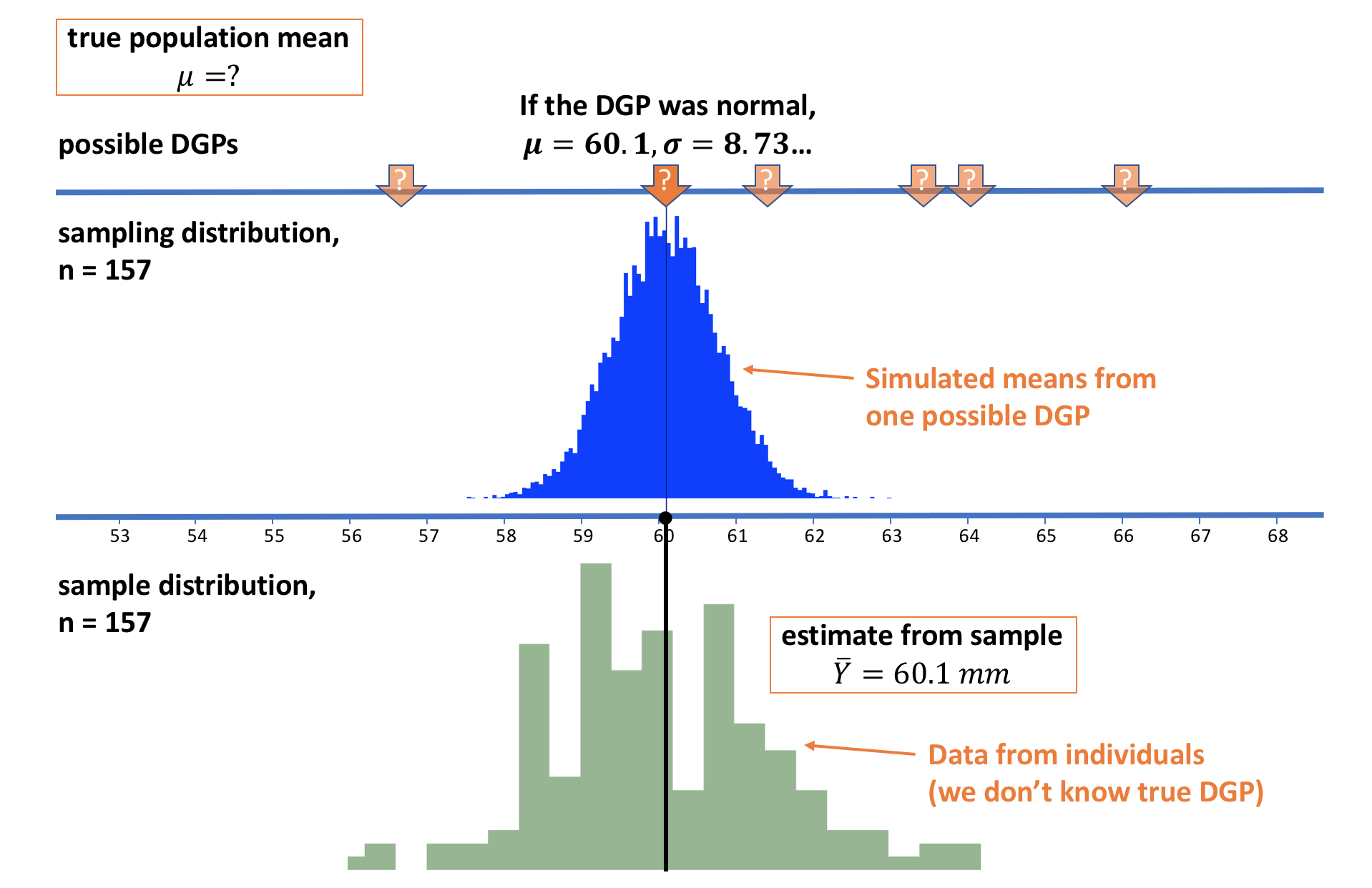 Nevertheless, we are going use our “if…” thinking and assume, for a moment, one possible DGP. We will assume it is normal, has a mean of 60.1 mm and a standard deviation of 8.73. Again, this is just one possible DGP out of an infinite number of possibilities.

Above the number line, measured off in the units of the outcome variable (thumb length in mm), we have pictured the sampling distribution of means of samples of n=157 generated by this one possible DGP.

We created this particular sampling distribution by simulation, but we could have used the Central Limit Theorem if we wanted. However we create it, the sampling distribution is a theoretical model; it doesn’t really exist, we just make it up to help us think about the mean we calculated based on our sample.

We know that the true sampling distribution will have the same mean as the population (\(\mu\)). But what we don’t know is the mean of the population. So, although we pictured the sampling distribution, above, centered on our sample mean of 60.1 mm, we can be virtually certain that this is wrong! It might be true (slight chance), or it might be close (slightly higher chance). But it is almost certainly wrong. 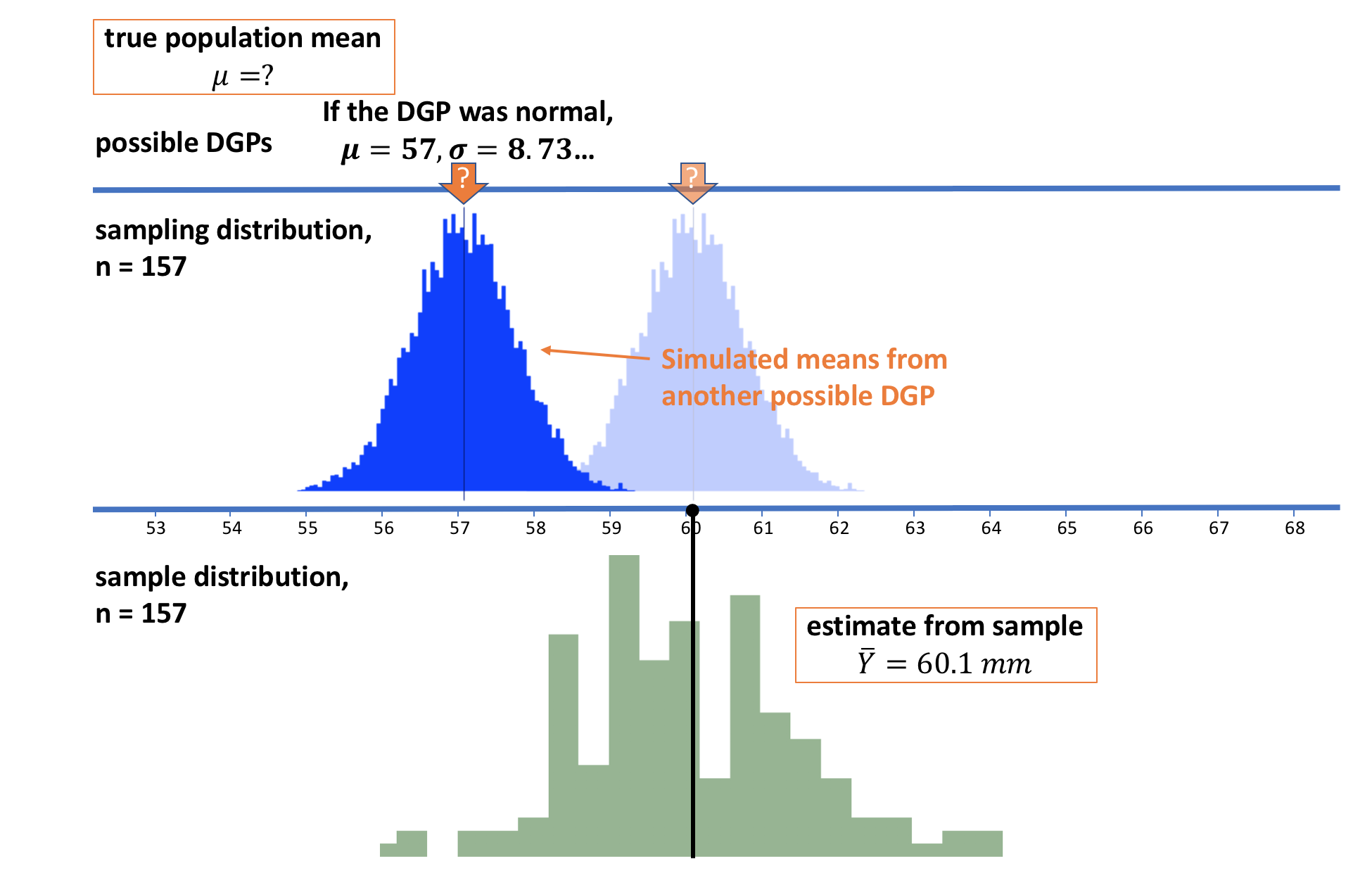 Let’s imagine a different possible DGP: one with a mean of 57. If the true mean of the DGP were 57, the imaginary sampling distribution would be generated more to the left, as pictured above, centered over a mean of 57 mm.

How likely is it that our sample, and its sample mean, could have been drawn from this new sampling distribution with \(\mu\) of 57? It would appear very unlikely. None of the simulated sample means (the dark blue simulated histogram) are anywhere near as high as the 60.1 mm we observed. 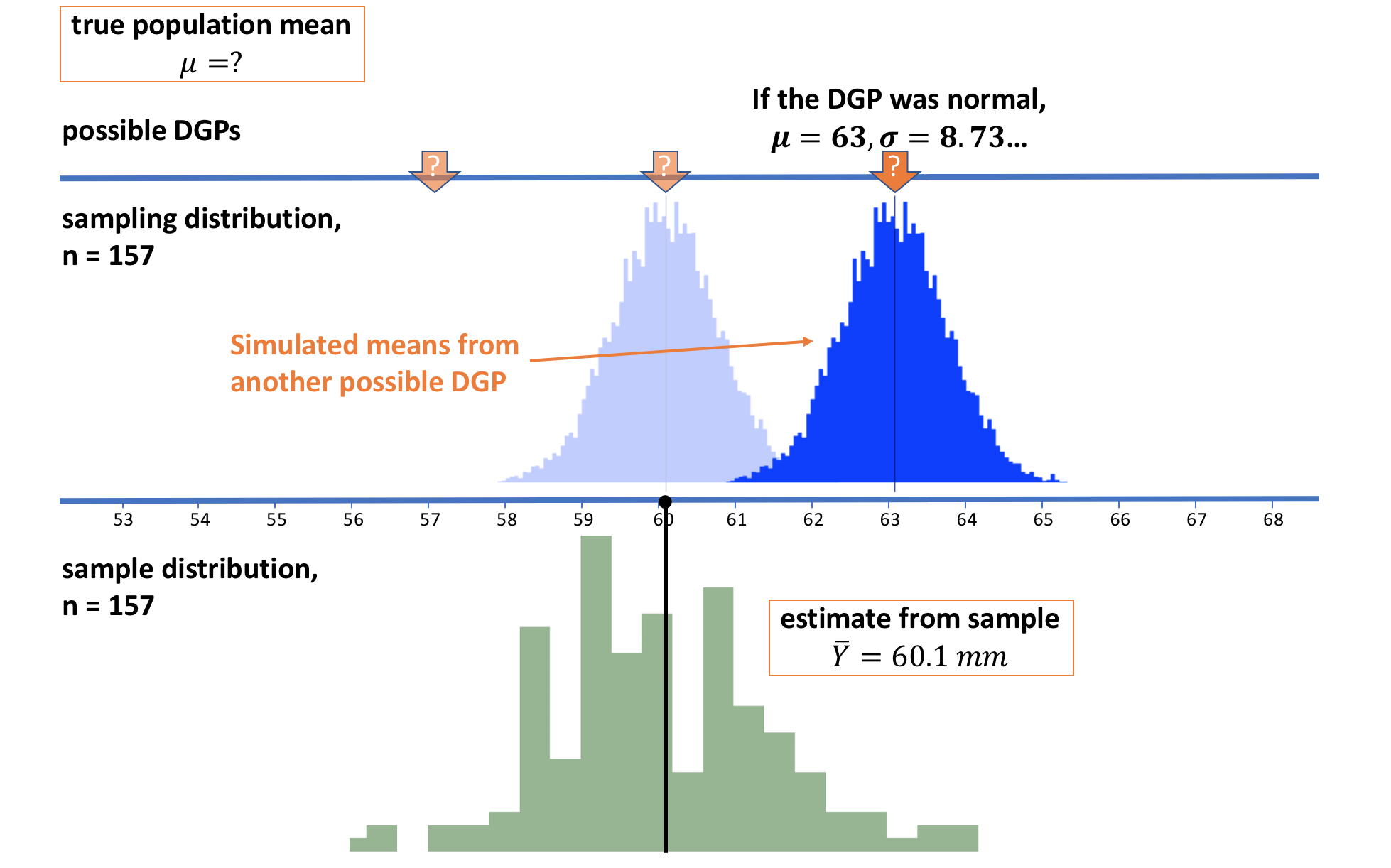 If we slide the hypothesized population and sampling distribution the other way, to the right, we can draw a similar conclusion. It is very unlikely that our sample was drawn from a sampling distribution (and thus a population) with a mean as high as 63. As a start, then, we can be pretty sure that the true population mean is somewhere between 57 and 63. Let’s now see if we can narrow that down even further.

Defining Likely: Putting the “95” into the 95% Confidence Interval

We have established that it is unlikely that the sample mean we observed came from a population with a true mean as high as 63. In fact, it looks very unlikely. But let’s now slide our imagined sampling distribution back to the left, until the mean of our sample lines up exactly with the point below which 2.5% of the simulated sample means in the sampling distribution fall (see picture below). 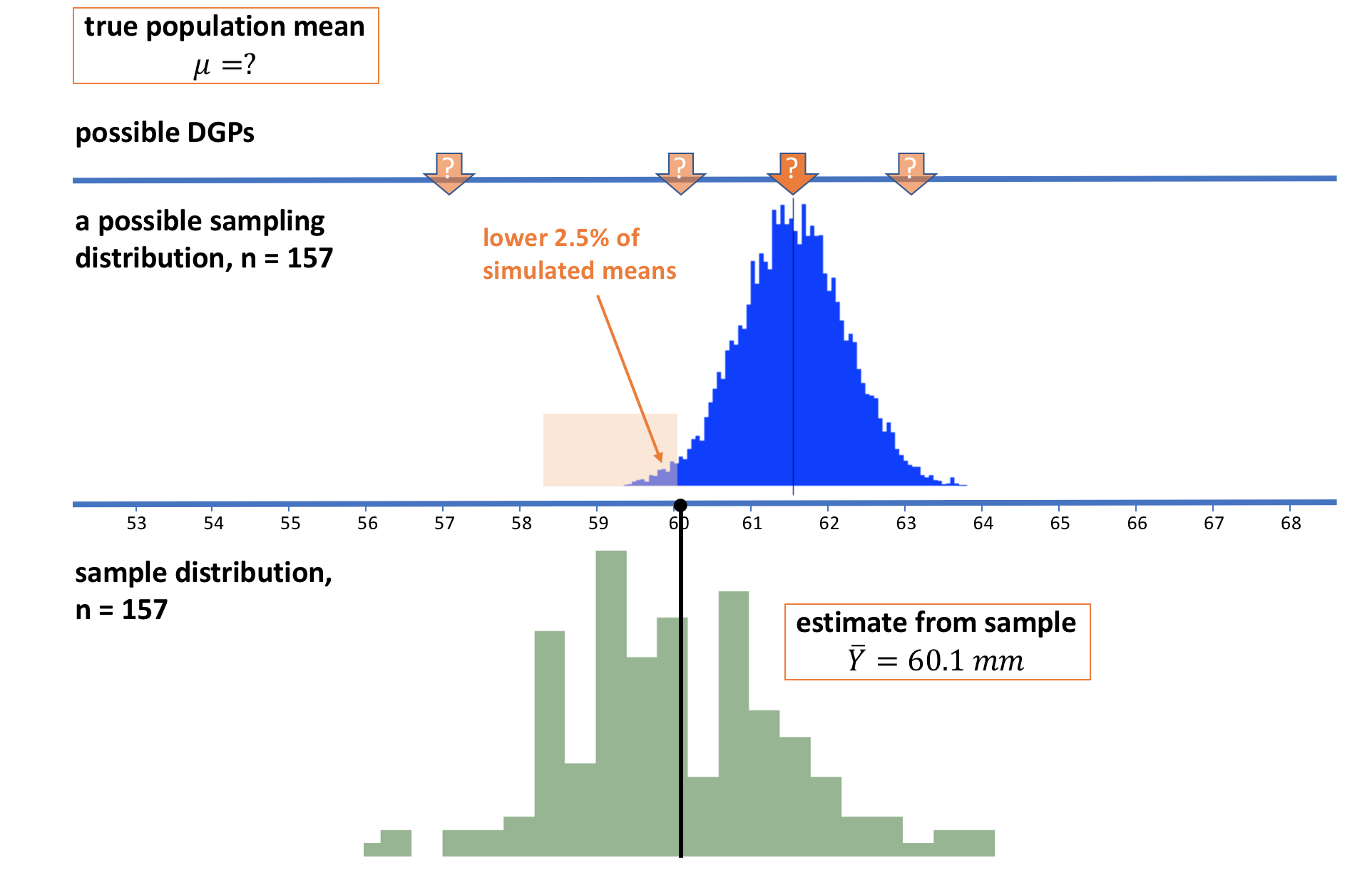 The simulated means in the light orange region would only occur in 2.5% of random samples of n=157 generated by this DGP. We are going to decide, just arbitrarily, to consider anything with a less than 2.5% chance of occurring “unlikely.” Our observed sample mean of 60.1 falls right at this boundary. We will consider our observed mean in the “likely” category, but any sample with a lower mean than the one we observed we will consider unlikely.

We haven’t yet figured out what the mean of the blue sampling distribution is, except that we know it is the same as the assumed mean of the DGP. Whatever it is though (and from the picture it looks to be somewhere between 61 and 62 mm), our sample would be one of the lowest means that are still considered “likely” under this sampling distribution. 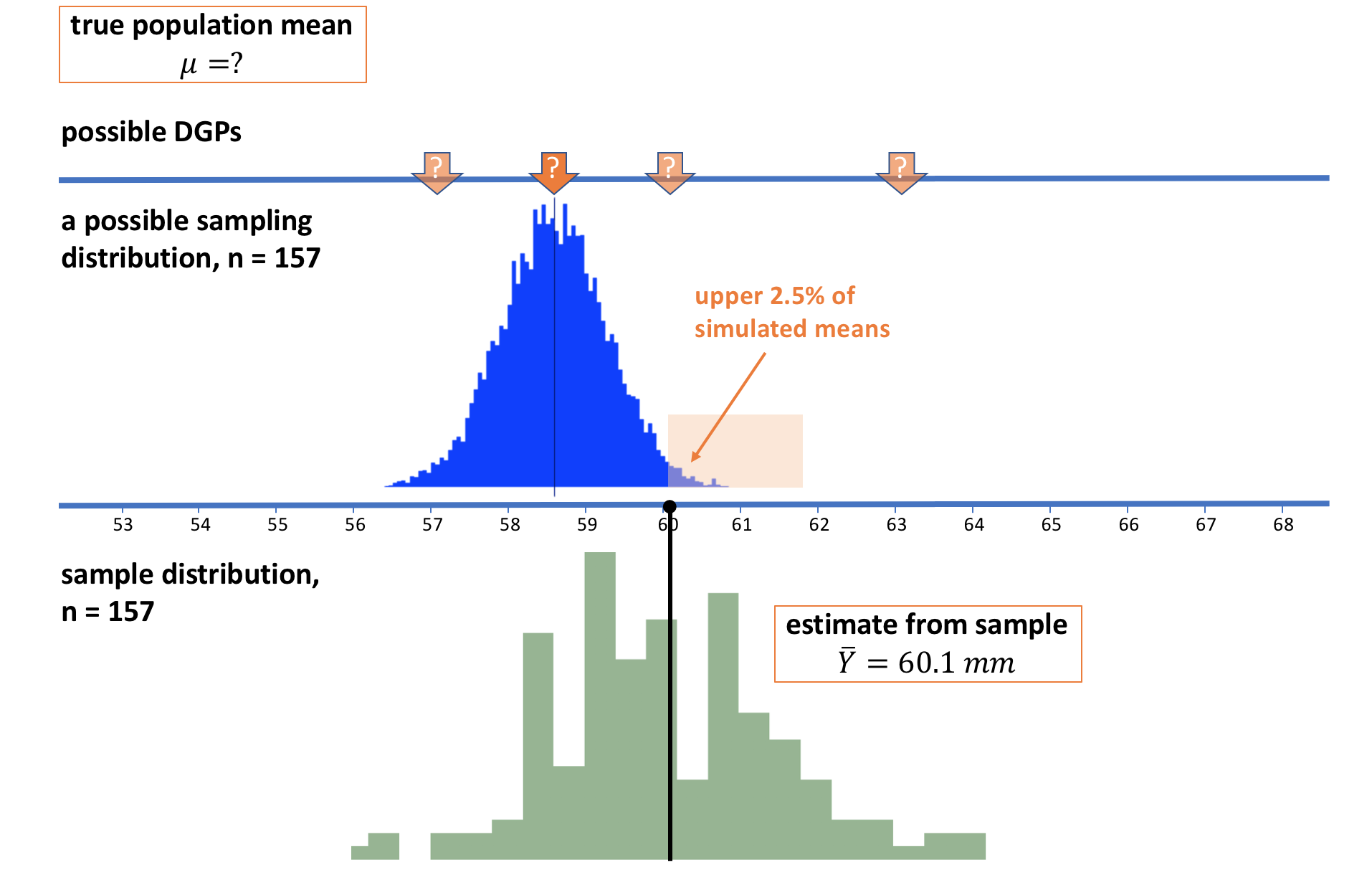 We can get a sense of this lower bound by looking at the mean of the sampling distribution at this point (which appears to be between 58 and 59 mm). If the population mean were any lower than our lower bound, our sample mean would have a 2.5% chance or less of being drawn.

Now that we see the logic, all that remains is to find the exact distance between the boundaries of the “unlikely” areas for the lower and upper sampling distributions, and the means of those two distributions (which represent the lower and upper possible values for the population mean). We refer to this distance as the critical distance (see picture below) but others have called it the margin of error. The units of the critical distance should be in mm, the scale of our outcome variable. 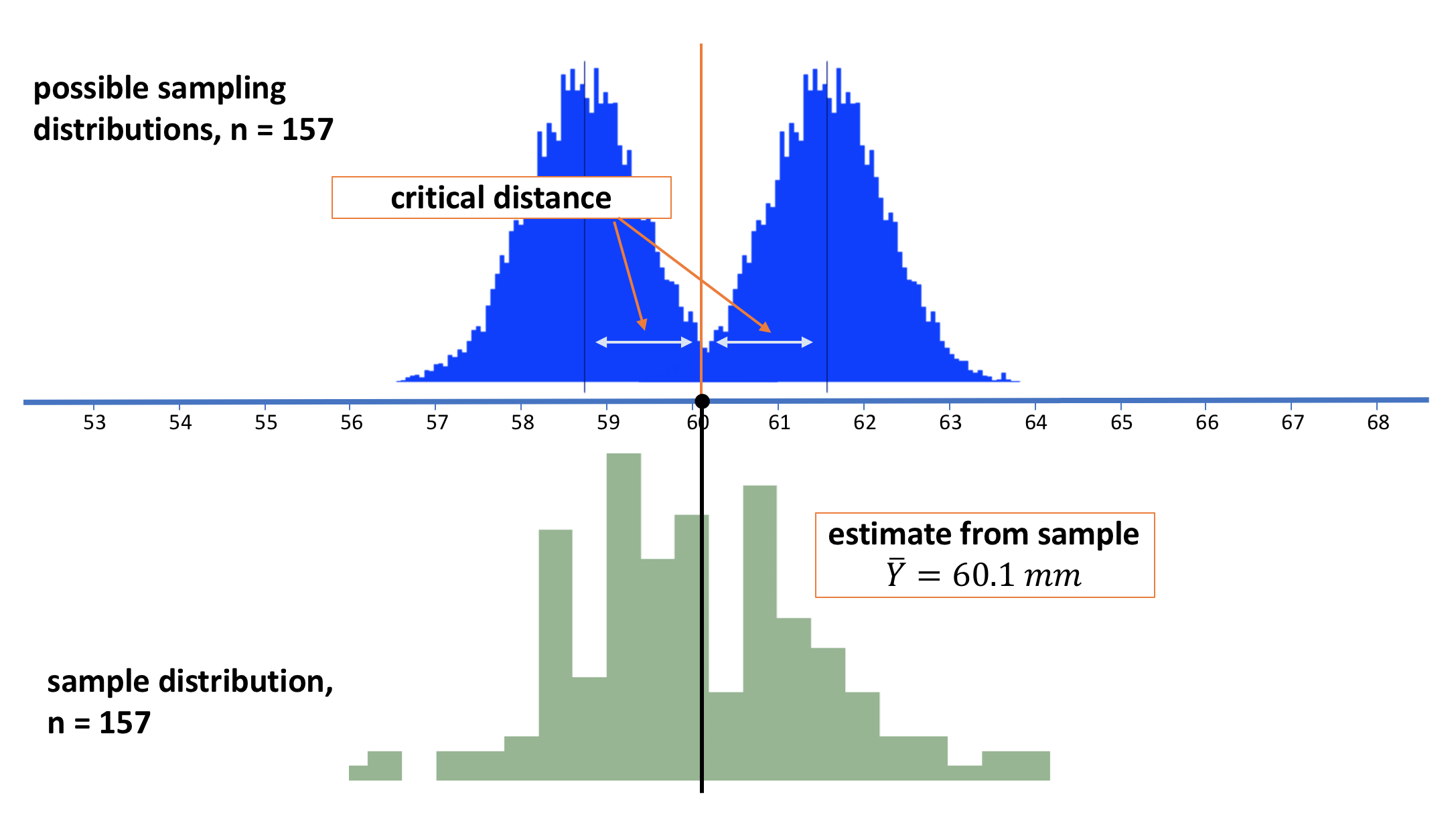 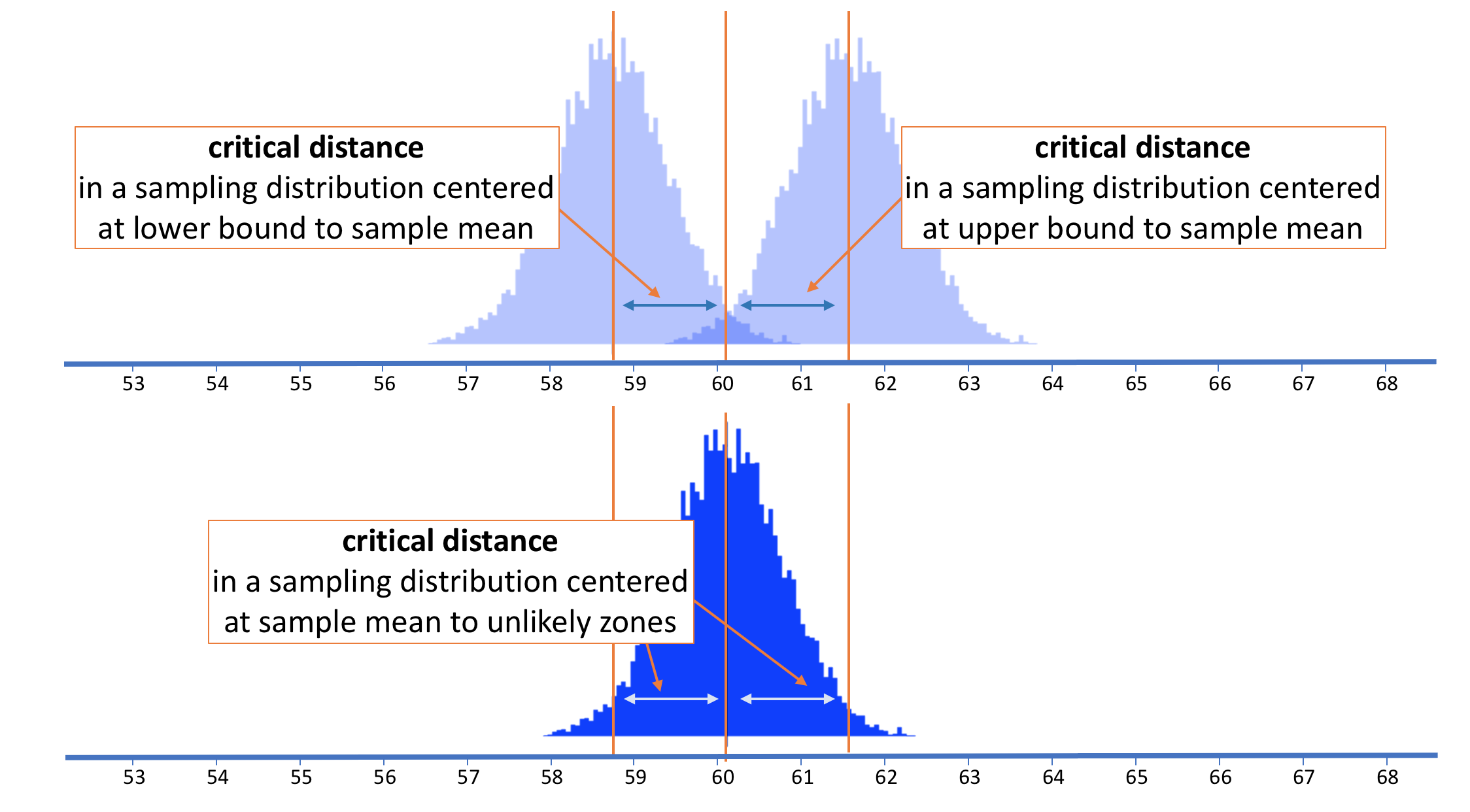 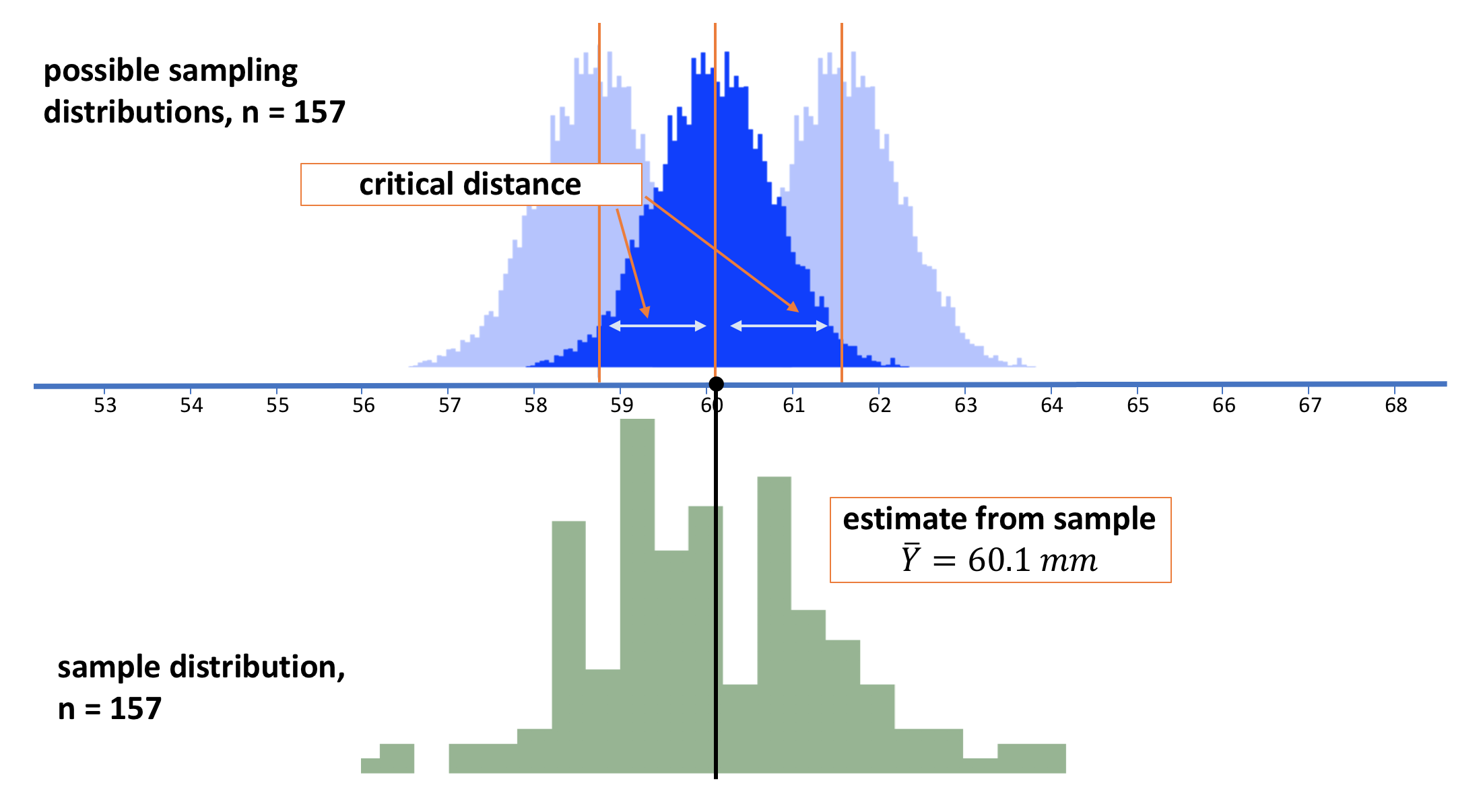 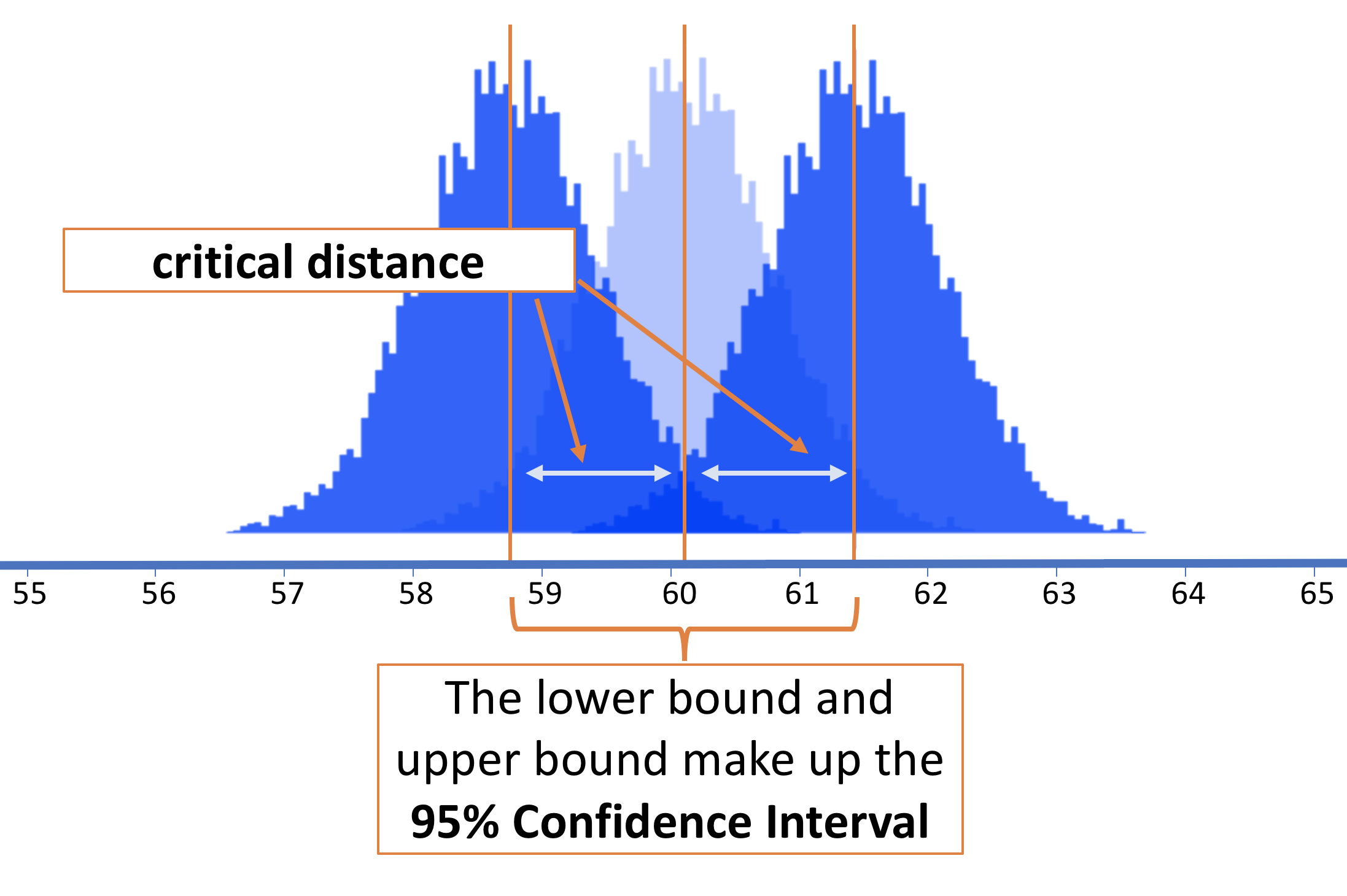 The two cutoff points in the sampling distribution centered at the sample mean—2.5% in the lower tail and 2.5% in the upper tail—will be exactly at the lower and upper boundaries of possible values for the population mean (see picture above).