We also explored the F distribution, which is usually used to model—and calculate probabilities based on—the sampling distribution of F. It is important to note that both PRE and F are comparisons (ratios) of two quantities. In the case of PRE, we are comparing the SS accounted for by our model to the total SS in the outcome variable. With F, we are comparing two different estimates of variance: one based on our model, the other based on variation leftover after our model is fit.

Both PRE and F represent a comparison of two models: the one that includes an explanatory variable with the one that does not (the empty model). Even though the analysis is represented in a single ANOVA table, we really are comparing these two competing models of the Data Generating Process.

In the empty model of the DGP, we assume that variation in the outcome \(Y\) is purely random (or at least so random that we cannot explain it). So the best we can do is just the mean of the population.

In the two-group model of the DGP, we assume that not all of the variation is random, and that some of it can be explained by the explanatory variable.

If you have studied statistics before, you no doubt have heard the term “null hypothesis.” When we refer to the empty model it is fundamentally the same as the null hypothesis: it’s the model that we would obtain if there were no effect of the explanatory variable on the outcome. In fact, we sometimes call it the null model.

Just as the tails of the t distribution never actually reach 0, so does the right-side tail of the F distribution never reach a probability of 0. What this means is that no matter how large our F statistic is for a particular sample, there is always a possibility, even if small, that our sample result happened by chance and that the null model is, in fact, true. For practical purposes, then, we need to set a criterion for what counts as “unlikely” (it’s called an alpha level), a probability of being wrong that we are willing to accept. Traditionally, that alpha level is set at .05.

As a general rule of thumb, if F is greater than 4, there is less than a .05 probability that the true effect of the explanatory variable (or, in GLM terms, the true value of the parameter \(\beta_1)\) is equal to 0. We can get an exact probability using the xpf() function, but for general purposes, the rule of 4 won’t be that far off, though it will vary depending on degrees of freedom. If the probability is less than .05, we generally will say that the result is statistically significant, meaning that we are confident that the true value of \(\beta_1\) is not equal to 0.

If we observe an F with a probability greater than .05, we typically retain the empty model. In the language of null hypothesis testing, we say that we have “failed to reject the null hypothesis.” It’s important to note that when we decide to retain the empty model it doesn’t mean that the empty model is true. For it to be true, the value of \(\beta_1\) would have to be exactly equal to 0. But we don’t know that it is equal to 0. All we know is that, within our acceptable margin of error, we are not confident that it is not equal to 0. Could it be .1? -.003? Of course it could be any of these. And it also could be 0.

Hypothesis Testing with the Tipping Experiment

Let’s put all these ideas together in the context of the Tipping Experiment. Use the following DataCamp window to fit the null model (where any differences between the Smiley Face and Control group are just caused by chance) and the complex model.

Here are the best-fitting estimates put into our GLM notation.

Now let’s look at some statistics that compare these two models (PRE and F ratio) by printing out the supernova table using the DataCamp window below.

In the background, R has examined the F distribution made of Fs that could have been generated by the empty model (if you want to take a look at it, you just need to use the xpf() function as we did before). Then R took a look at where our sample F appeared relative to all those possible Fs and printed out the p-value in our supernova table. 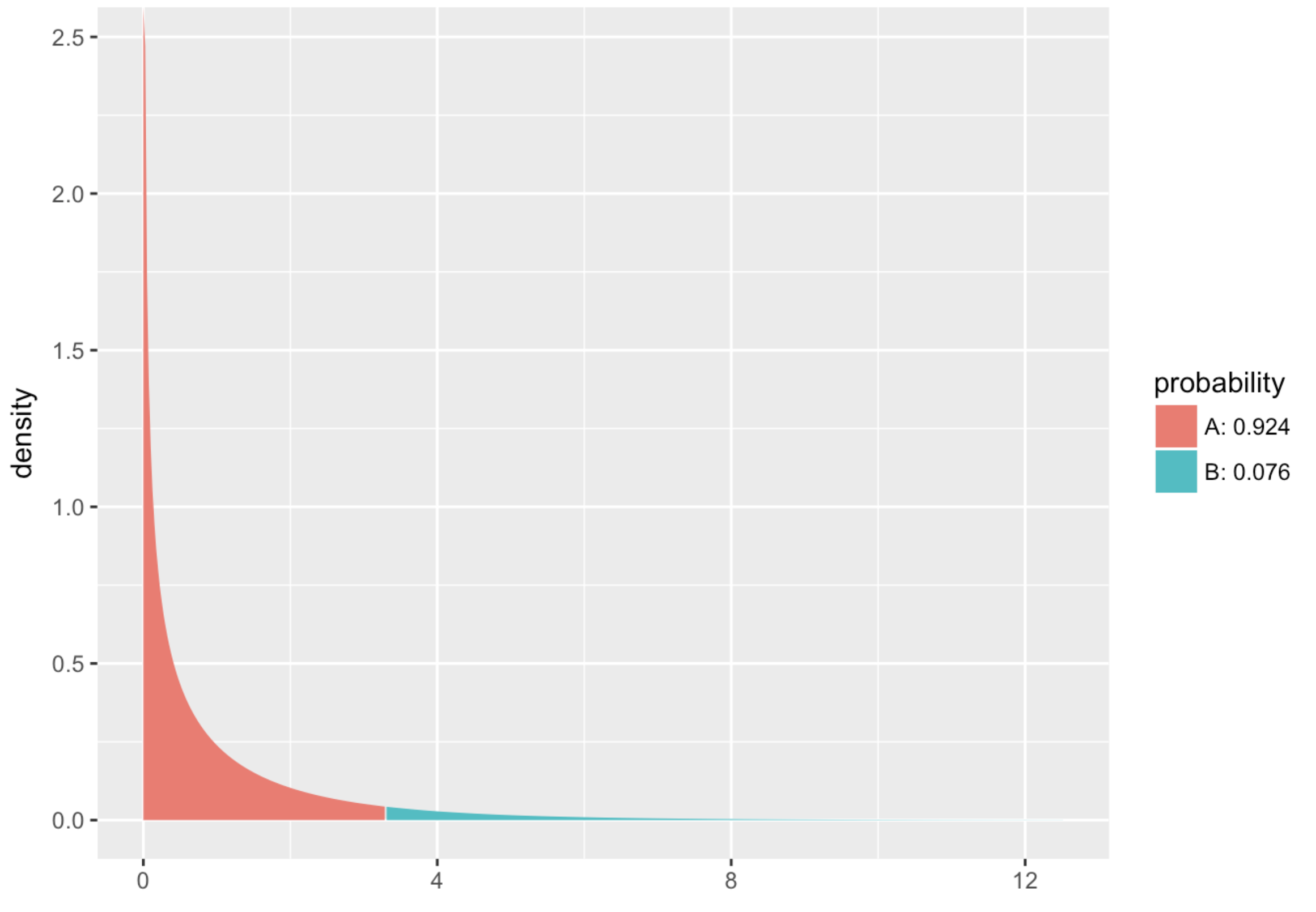 What now? Is our empty model unlikely to have generated our sample F? Not according to our pre-set standards of what counts as “unlikely.” This means \(\beta_1\), the increment, might be 0. We shouldn’t get rid of the empty model in favor of the complex model.

You may have heard of a t test, or even studied it in a previous statistics class. The t test is used to test the statistical significance between the means of two independent groups. We analyze that same situation by fitting the two-group model, and then using F to assess the difference between the two groups.

We use F instead of t because it will work in virtually any situation in which you want to evaluate statistical models, whereas the t test is more limited. But if someone asks you, now you know what a t test is.

In the case of the tipping experiment, the model comparison could yield a fairly straightforward interpretation. If we do the experiment and find an F that is greater than 4 (which we didn’t), we could conclude that the drawing of a smiley face on a check causes restaurant patrons to tip more.

This causal interpretation is not purely the result of statistical analysis. It is, instead, the combination of statistical analysis and study design. In this case, we have the advantage of random assignment: each party dining at the restaurant was randomly assigned to either get a smiley face or not. For this reason, if we detect a difference between the groups we can assume it is due to this experimental manipulation and not something else.

In the absence of random assignment, we can rule out that the F we observed was simply due to sampling variation, and we can adopt the more complex model. But we still need to always wonder if our interpretation of the complex model is correct, or if there may be some confounding variable we haven’t considered. Design and analysis are both important, and must be considered together.

11.3 The F Distribution 11.5 Type I and II Error
Responses
close