9.2 Sampling Distributions: A Way to See the Variation in an Estimate

Even though we normally would only have one sample and one estimate of the population mean, we hope to have conveyed by now that this single estimate is, itself, generated from a distribution of possible estimates that could have been calculated based on different random samples.

Based on just the three estimates we have calculated so far, based on three random samples, we know that the estimates vary. But how much do they vary? And how far off could any single estimate be? To answer this question we need more than just three estimates. What we need, in fact, is a sampling distribution of means.

Sticking with our die example, let’s generate more means for the sampling distribution of means of samples of n=24. We can use the do() function to repeatedly generate random samples and compute their means. This code will generate a data frame with the means from three samples of n=24 die rolls.

Modify the code to generate a data frame with 10 sample means.

It is helpful to start thinking about the means of the random samples we are generating as a distribution. In fact, it is a sampling distribution of means. Just like any other distribution, it is useful to visualize the distribution and examine its shape, center, and spread.

Let’s take the 10 sample means we just generated and save them in a data frame using the assignment operator (<-). We’ll call the new data frame bunchofmeans. Add the code to print out the first six lines of the data frame.

Note that the do() function returns a data frame with the function (in this case mean()) as a variable.

Make a histogram of the 10 sample means. Add a vertical line where we know the population mean is. 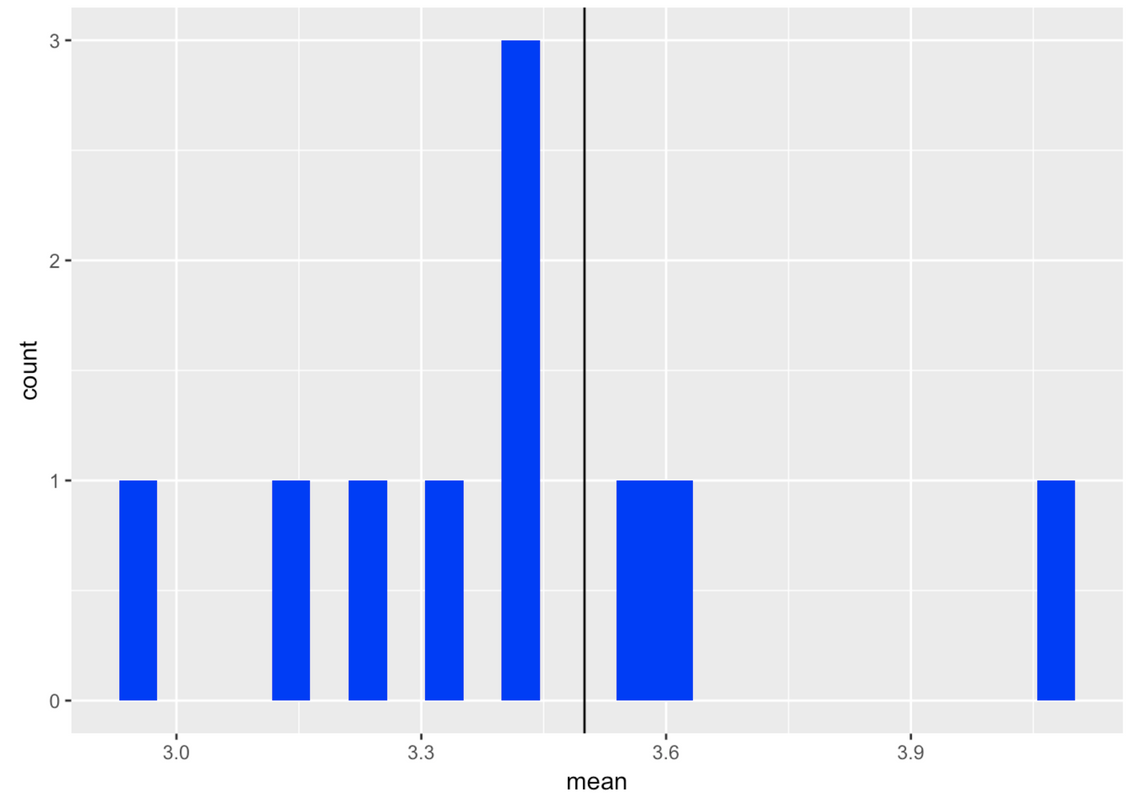 It’s a lot easier to look at a distribution of sample means when they are in a histogram than as just a list of means. In fact, why limit ourselves to 10 samples? Let’s simulate a lot of samples (let’s try 1,000) and examine the resulting distribution—the sampling distribution—of 1,000 means.

Modify the code below to simulate 1,000 samples. We have added code to plot the means on a histogram and chained on a vertical line for the expected mean of the population (3.5). 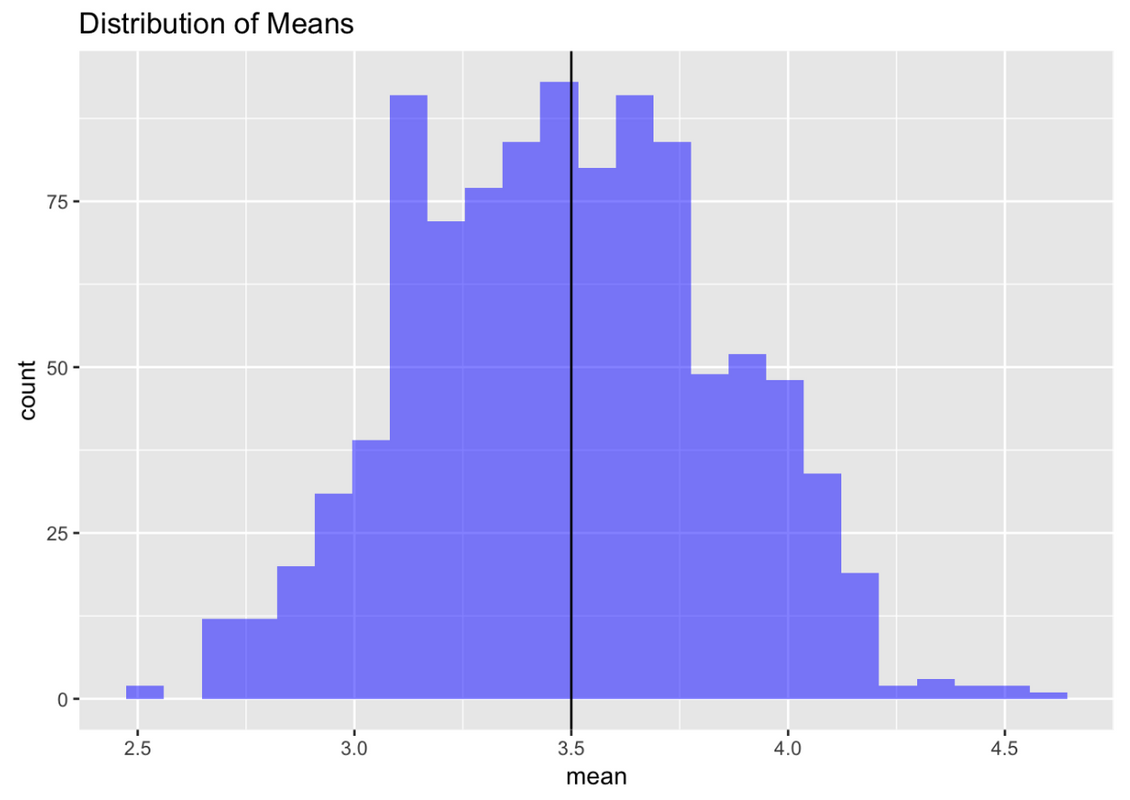 In previous chapters, when we created histograms we were looking at distributions of individual units—people, fingers, countries. But this is a new kind of distribution. This histogram shows a distribution of sample means, each summarizing a single sample of 24 die rolls.

We know, and have demonstrated, that the DGP of rolling a die would result in a uniform distribution of individual die rolls; each side should appear on 1/6 of the rolls over time. But when we take the means of many samples of die rolls, we end up with something that looks a lot like a normal distribution.

Why We Need Sampling Distributions

Let’s go back to the problem we started with: How far off could an estimate of a population mean be if based on a single sample of n=24? To answer this question, we need a sampling distribution of means.

Take a look at the sampling distribution we just created of 1,000 samples of n=24 die rolls. We can see that the center of this distribution appears to be very close to what we know the population mean to be in this case: 3.5.

What this means is that if we had only chosen one random sample of n=24, there is a chance that our estimate of the mean could have been off by as much as 1—either 1 lower, or 1 higher—than the true population mean. But, based on the sampling distribution we constructed, we can say that it is unlikely that our estimate would be off by more than 1.

9.1 Exploring the Variation in an Estimate 9.3 Simulations from a Different DGP, and Learning to Say 'If'
Responses
close